PyCon Kyushu is a technical conference for the users of the Python programming language in the Kyushu region. I took this opportunity to participate and travel to meet our fellow Pythonistas after a long 2-year break. 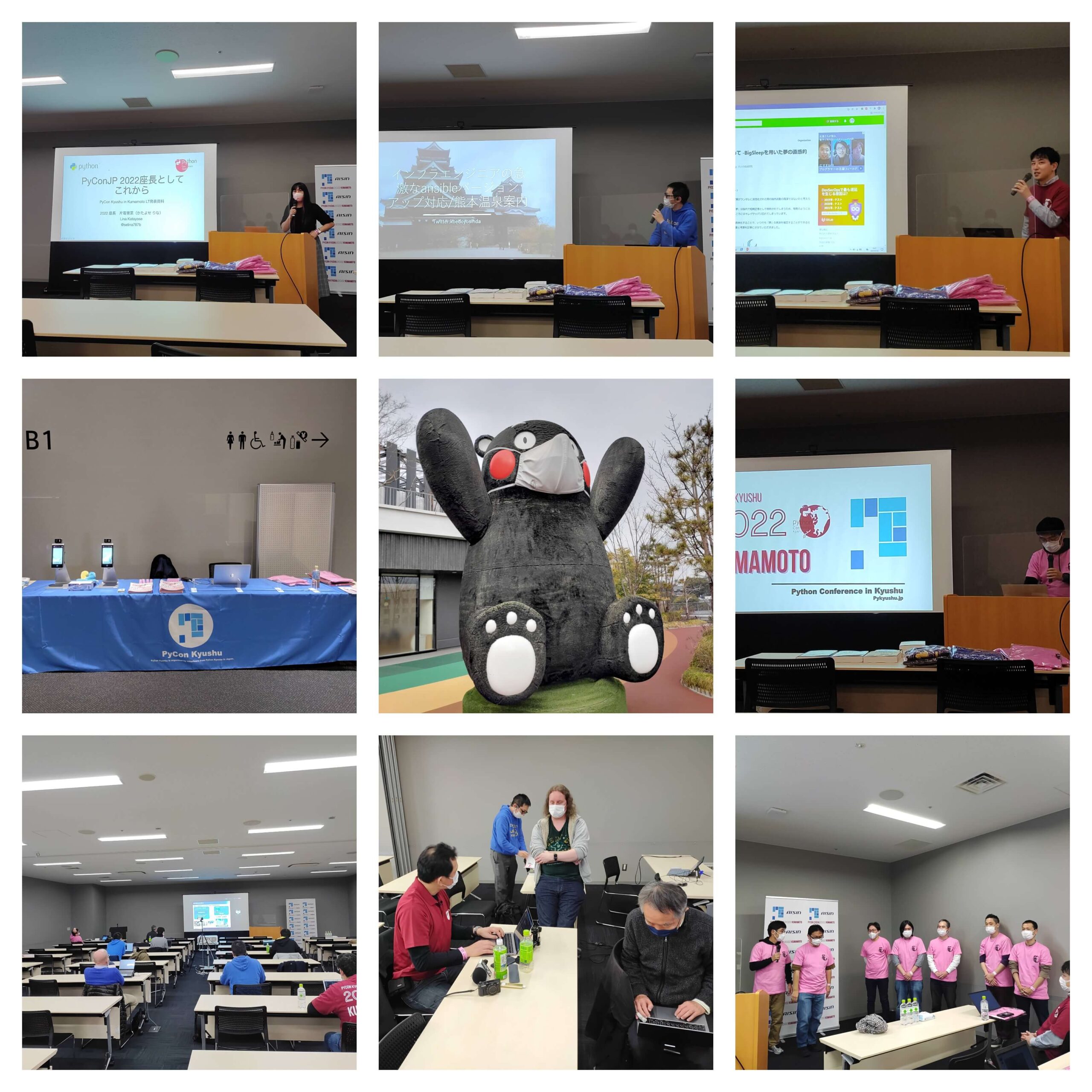 For those of you who are not familiar with the PyCons in Japan, this is the 4th edition of PyCon Kyushu.

This year’s theme: Grow with Covid-19

On a sunny Saturday of 22nd January, the first Python-related conference for 2022 in Kyushu was held in Kumamoto-Jo Hall (熊本城ホール).

The venue is located in a strategic location within Kumamoto city. It is part of a mall where you can get things to eat and other stuff, while across the street there is a Dormy Inn hotel. Connected to the venue is also the Sakuramachi Bus Terminal (桜町バスターミナル), where you can catch a bus to the Kumamoto Airport and basically anywhere else in Kyushu.

The talks were spread out into two tracks, and here are some talks which I could attend. All of the talks were done in Japanese. I am fluent in the language and can understand the talks, but writing in English while listening to them is another skill altogether that I do not have.

If you’re interested in the details of the talks, you should read the actual slides. I will include links to the slides in this post if they are made available by the speakers.

Consider this post as giving a scrappy, high-level overview and a feel for the kind of content that we had during PyCon Kyushu 2022.

Keynote by Takayuki Shimizukawa: Programming and me

The keynote for this year was by Takayuki Shimizukawa, a well-known Pythonista within the community. He joined us remotely from Tokyo. 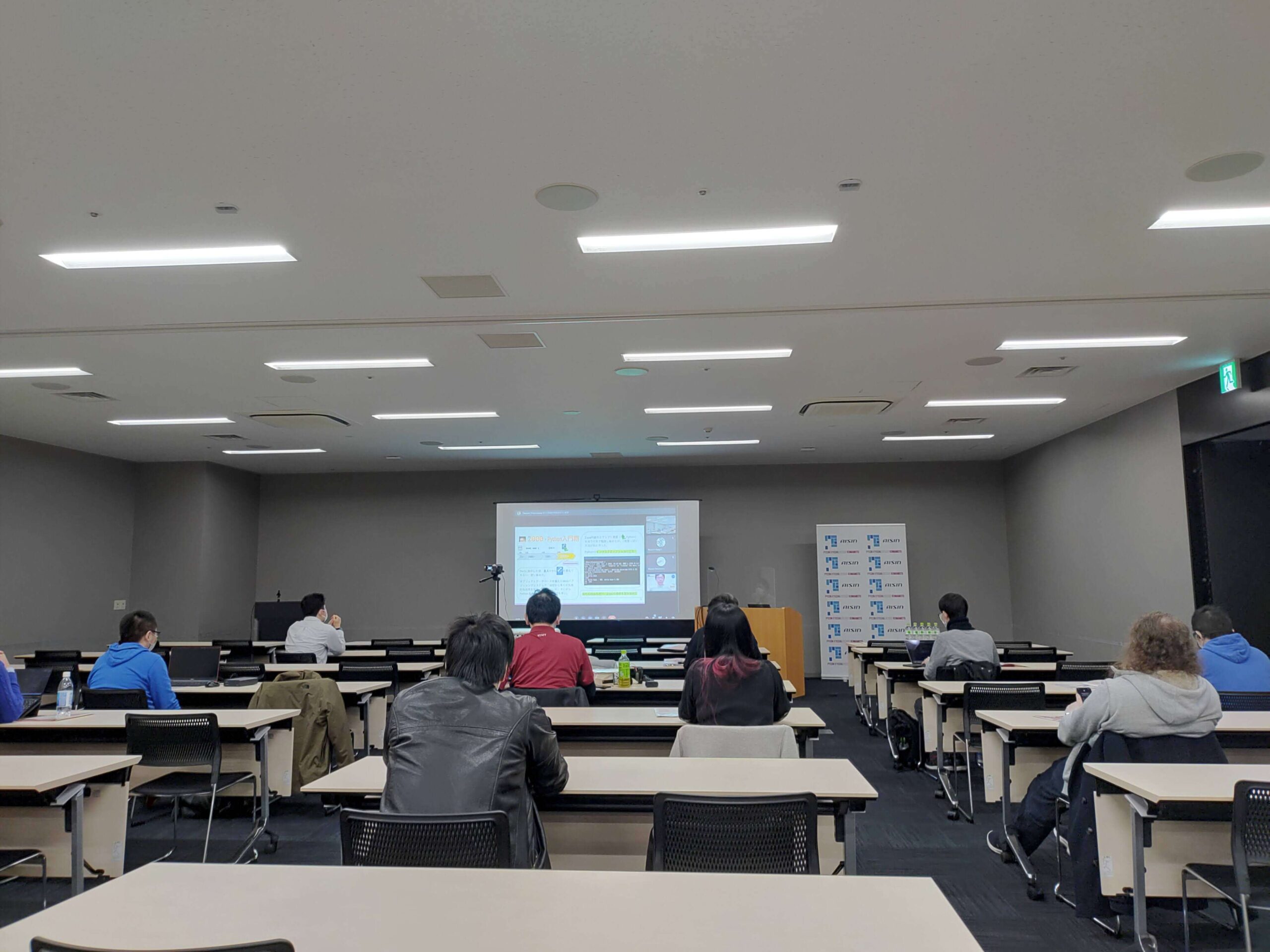 Shimizukawa-san talked about his programming journey, starting from 1985 with his experience in gaming, and started playing around with Python in 2003. He continued to talk about starting various user groups and meet-ups, with the biggest one in 2010 which was the start of PyCon JP, now the largest Python conference in Japan.

His keynote was aimed more towards newcomers, reflecting on the path he has taken in the many years being involved in the open-source and Python community.

Some of the advice given by Shimizukawa-san to the audience based on his experience were:

Shimizukawa-san has been present since the start of the internet boom age in Japan and hearing his keynote sort of gives you a feel of how open-source, the importance of community involvement, and how open-source and the Python community has evolved and expanded in Japan over the years.

Becoming a Pythonista from analyzing static code by Yuki Takino

The next talk was by Yuki Takino on using tools to analyze static code. He started by addressing the obvious question: “What is analyzing static code”. 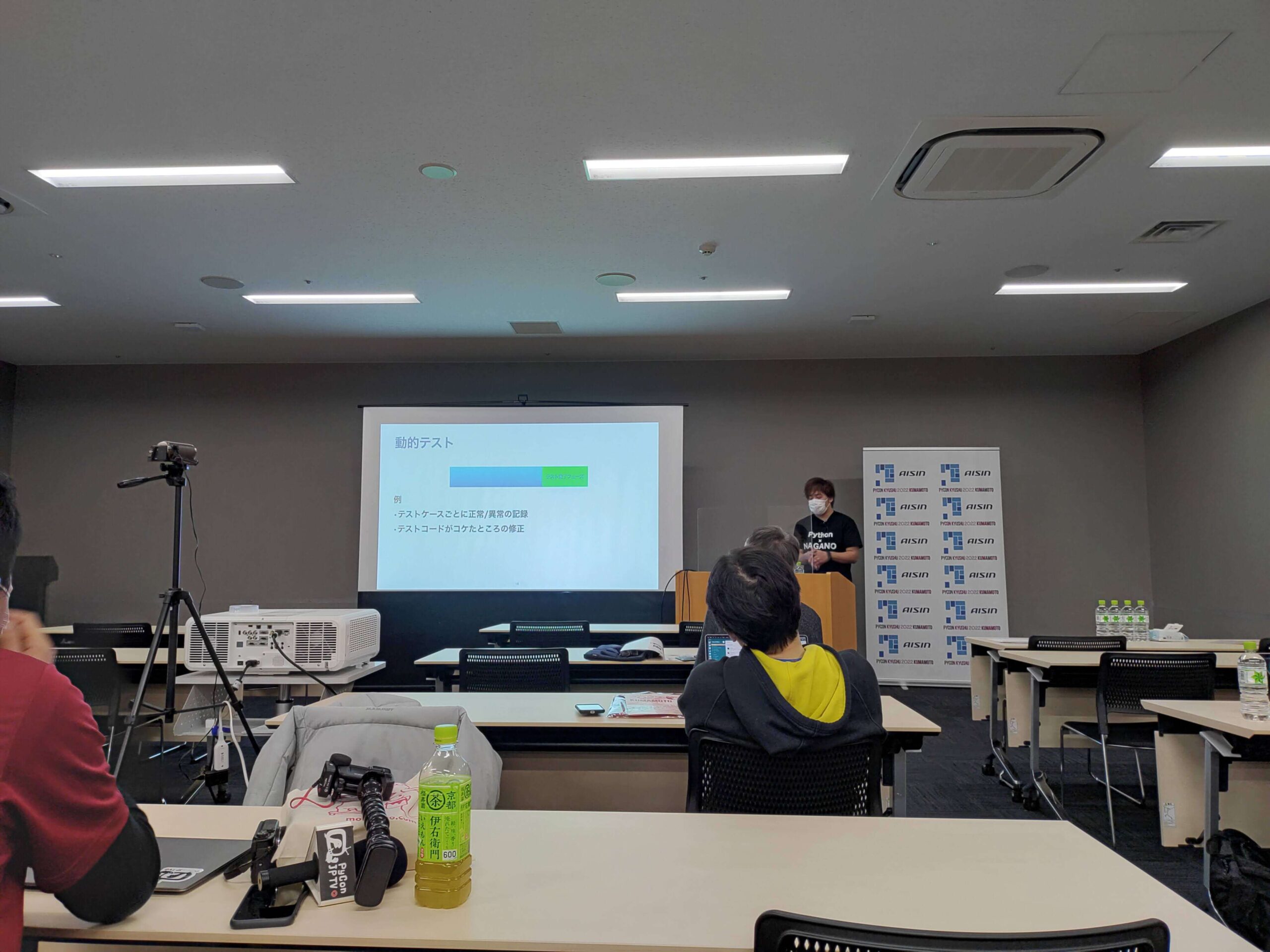 Takino-san introduces the audience to some commonly used tools, such as:

Takino-san showed examples of each tool’s output and how it affected code to the audience. Other tools introduced were:

The slides for Takino-san’s talk can be downloaded here 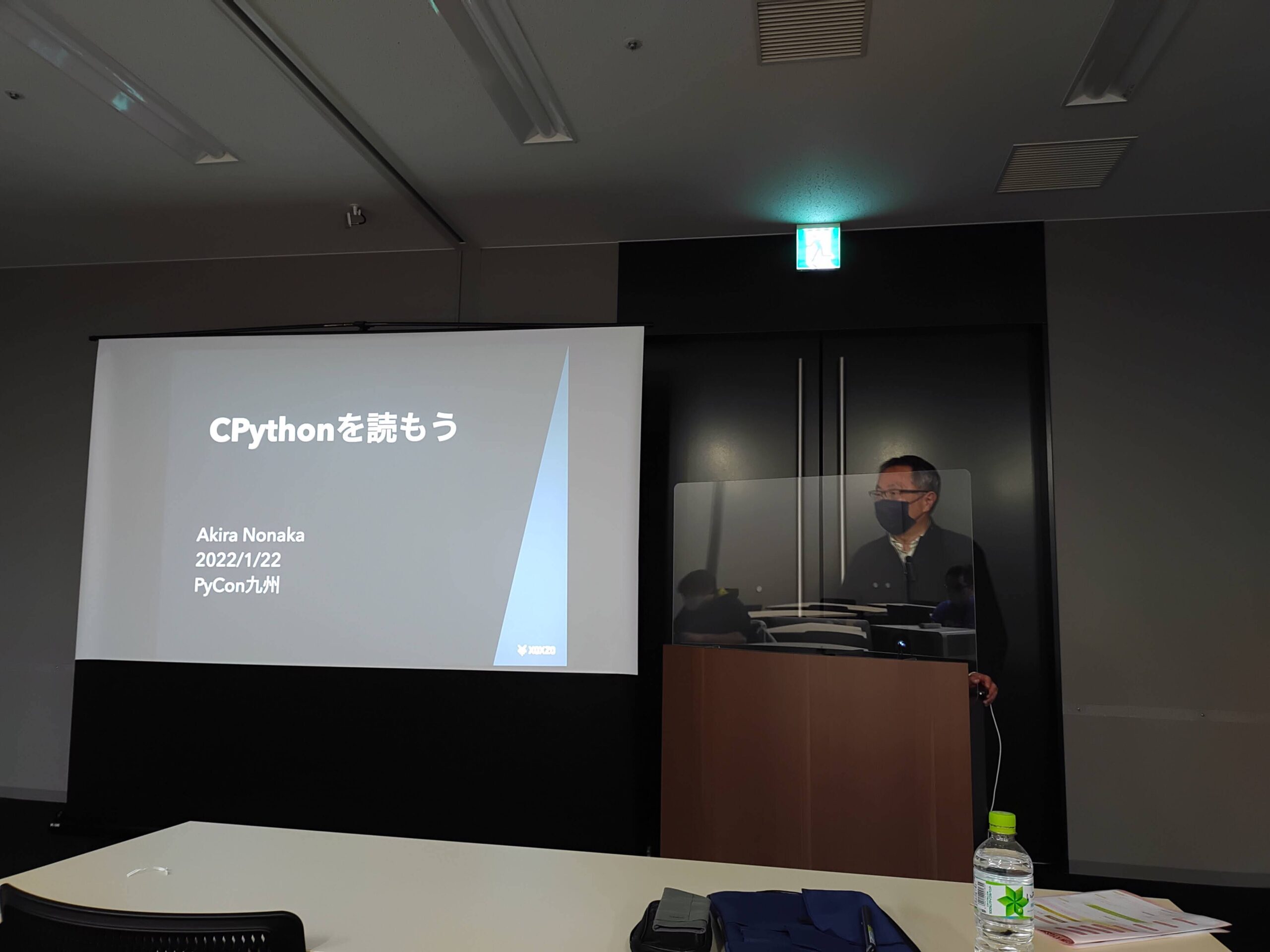 Akira is also a team member with me in Xoxzo and he shared with us his experience trying to read the CPython source code.

Some of the interesting things he mentioned during his talk:

He also explains the flow of processing the source code, from the back and forth of lexical analysis and parsing the program, to compiling (creating the .pyc file) and finally executing it. His talk today’s talk focused more on the lexical and parsing section of the flow.

Some other pointers he mentioned:
– It might be best not to try to understand Parser/parser.c. It’s long and is a generated file by the Parser Generator
– struct tok_state (tokenizer.h) holds the indent data and remembers the location of the column number.
– Each indent takes up one stack, and the maximum stack is 100.

At the end of the talk, Akira showed a demo by changing a definition of the parser by replacing it with a different definition and recompiling the code to see how it actually works from the Python interpreter. The speaker, Nakamura-san joined us online. There were some technical hiccups at the start when the audio and video were cut off, but we got underway after a bit of fixing.

The main theme of his talk was using Python as the infrastructure or 基盤 for processing data.

Some of the things he mentioned during his talk

An important point he pointed out is that the data infrastructure that you choose should solve for you the problem of
– Accessing the data for different roles in the company
– Easily allow you to keep the freshness of your data.

The slides can be downloaded here 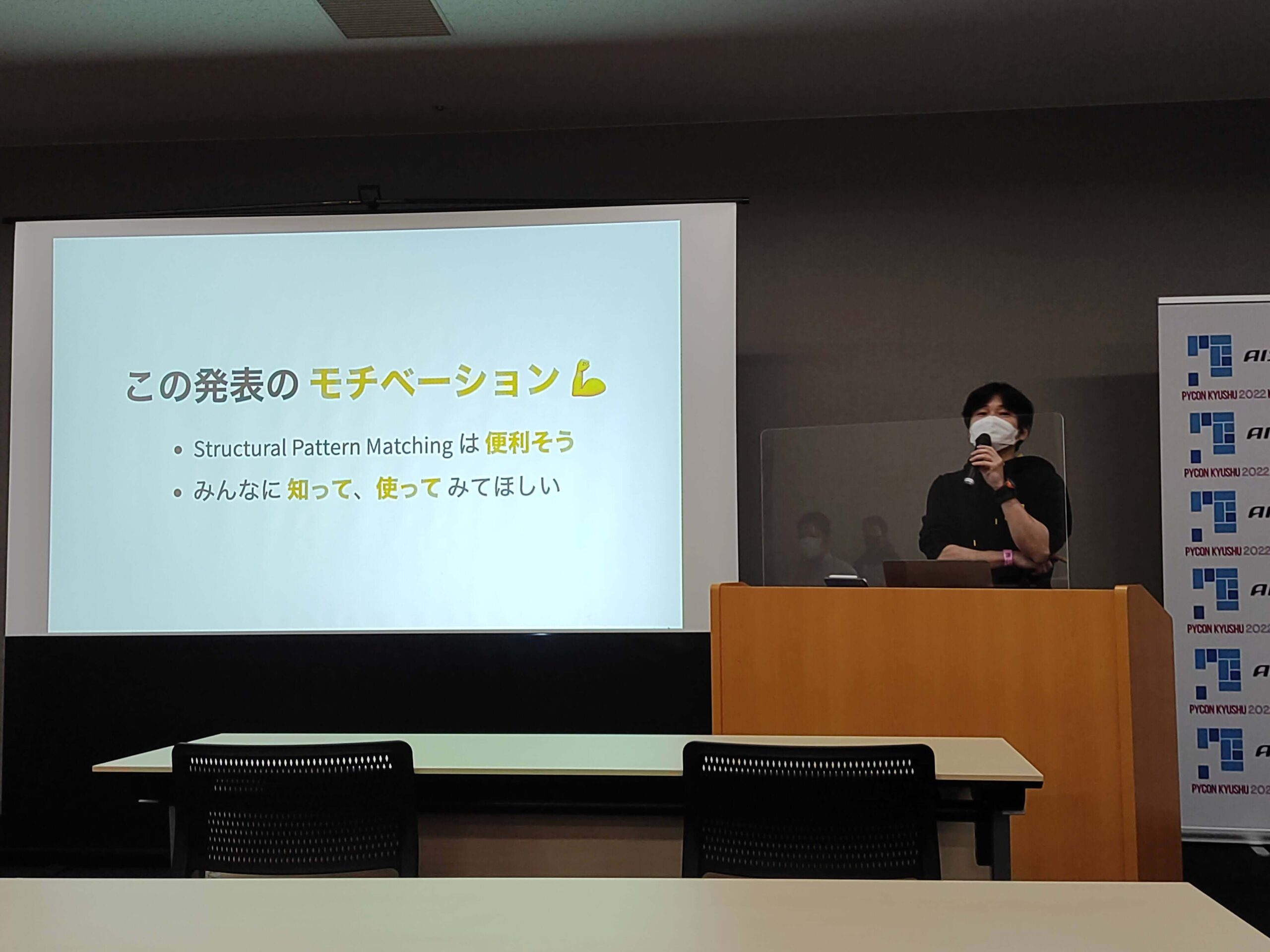 With pattern matching, we can write cleaner code than the usual if/elif/else logic that we’re accustomed to.

There were a few patterns quickly covered during the talk, such as
– Literal pattern
– OR pattern
– AS pattern
– Wild card pattern
– Class pattern
– Sequence pattern
– Mapping pattern

I’m not using Python 3.10 right now and did not have the pleasure of trying out structural pattern matching out, but it seems helpful when we have a complex if/elif/else logic to be replaced. Before that, I first need to understand the different patterns available.

The slides can be found here

Introduction to gRPC with Python: Webchat implementation hands-on by nishida 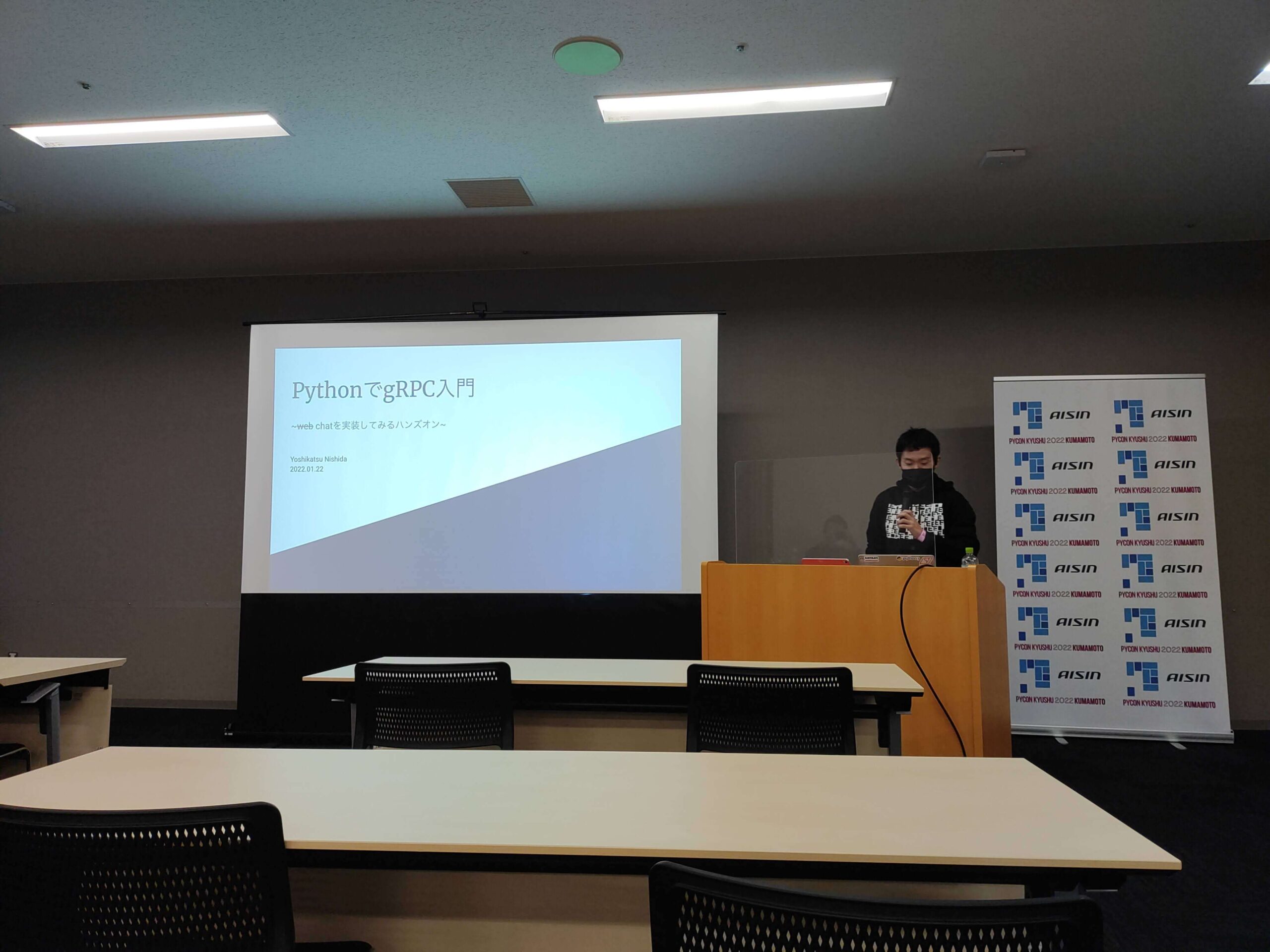 nishida is the founder of “Code for Yamaguchi”. He is still in school, but currently is preparing to launch his business. His talk today was to introduce gRPC through a simple implementation of chat.

The talk started with introducing the world of ReST API. ReST API has been a good thing for developers making it seamless between servers and clients, but at the same time, there are issues such as non-uniformed API development which makes it confusing.

Contents of the talk
– What is RPC? (Remote Procedure Call)
– What is gRPC? (a RPC framework released by Google in Feb 2015).

Bi-directional streaming RPC is what we’re usually interested in when we talk about RPC.

Problems with gRPC:
– Doesn’t support HTTP/1. If you have a browser or an environment that can only use HTTP/1, then gRPC is not for you. But if you try using gRPC Web or gRPC web proxy might work for you.

nishida also has sample code for a hands-on experience to learn about gRPC with Python, which you can find here.

Slides for his talk can be found here.

The state of Python in 2022 by Manabu Terada

The final talk I attended was on the state of Python in 2022 by Manabu Terada, which is an updated talk that was originally made for the first mini PyCon Kyushu in 2017, which was also in Kumamoto (I was also present at that time) 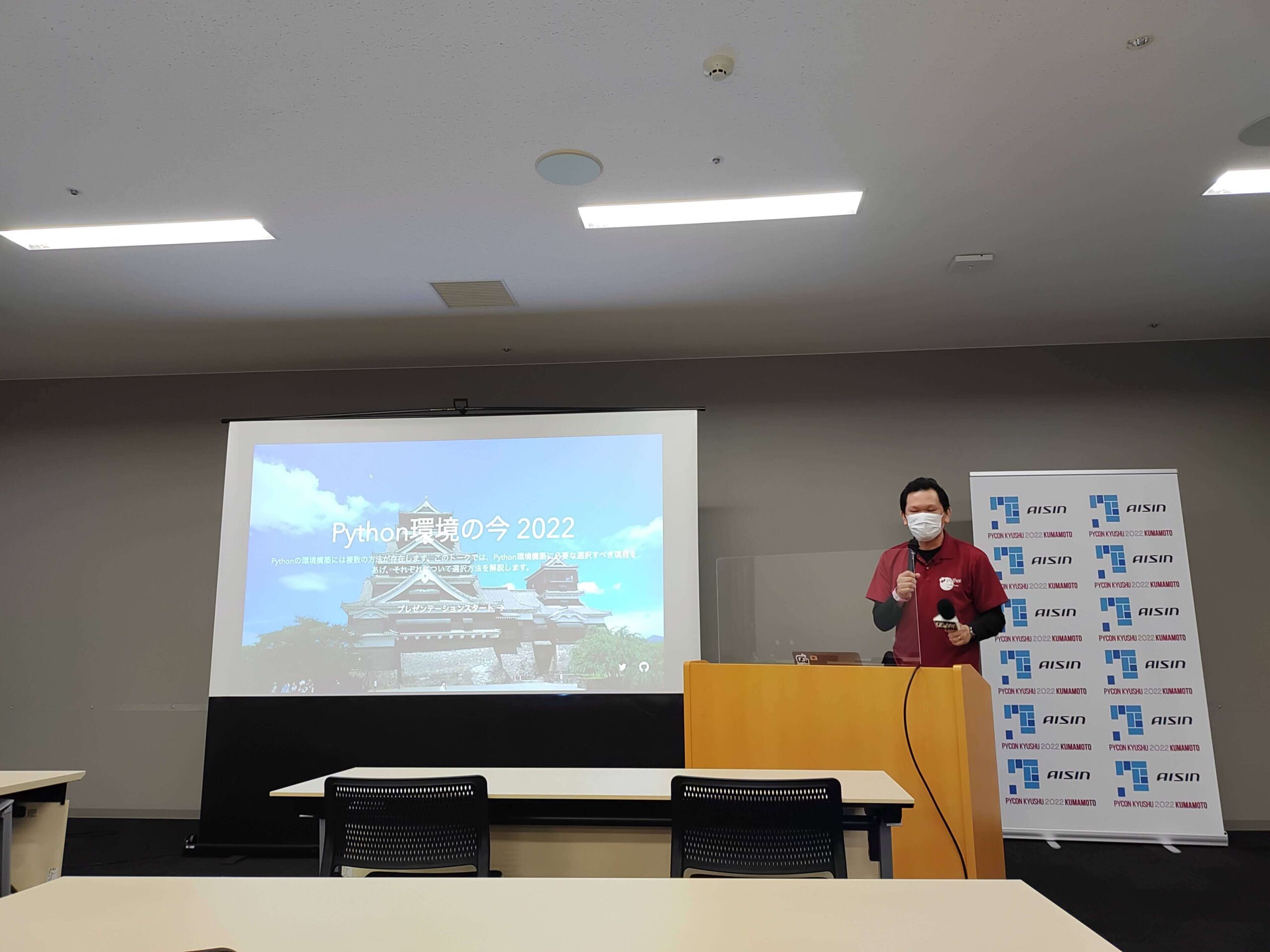 Terada-san lists out his personal development environment and his favorite tools that he uses for implementation, such as the version of Python that he uses.

Interesting points during his presentation
– A comparison that he made between the years when different versions of Python were released against events such as PyCon APAC in SG, PyCon Kyushu in Fukuoka, and PyCon APAC in JP which I can relate to.
– Explanation of the “wheel” (PEP427: The Wheel Binary Package Format). What is wheel? Turns out it’s a way to install packages that require C compilation to fit with different machine architectures. I didn’t know this!

There was little technical content in the talk, but more of looking back at the history and timeline of the different Python versions and personal preferences of the speaker such as when to upgrade to a newer Python version or which installer to use. There was also some explanation on how to read the Python version numbers.

Slides can be found here

PyCon JP Association’s PyCon JP TV was also there interviewing the speakers and attendees for another episode of their program. Their program is in Japanese but if you want a quick and deep lowdown on the current status of Python and its community in Japan, they might be one of the best sources you can have 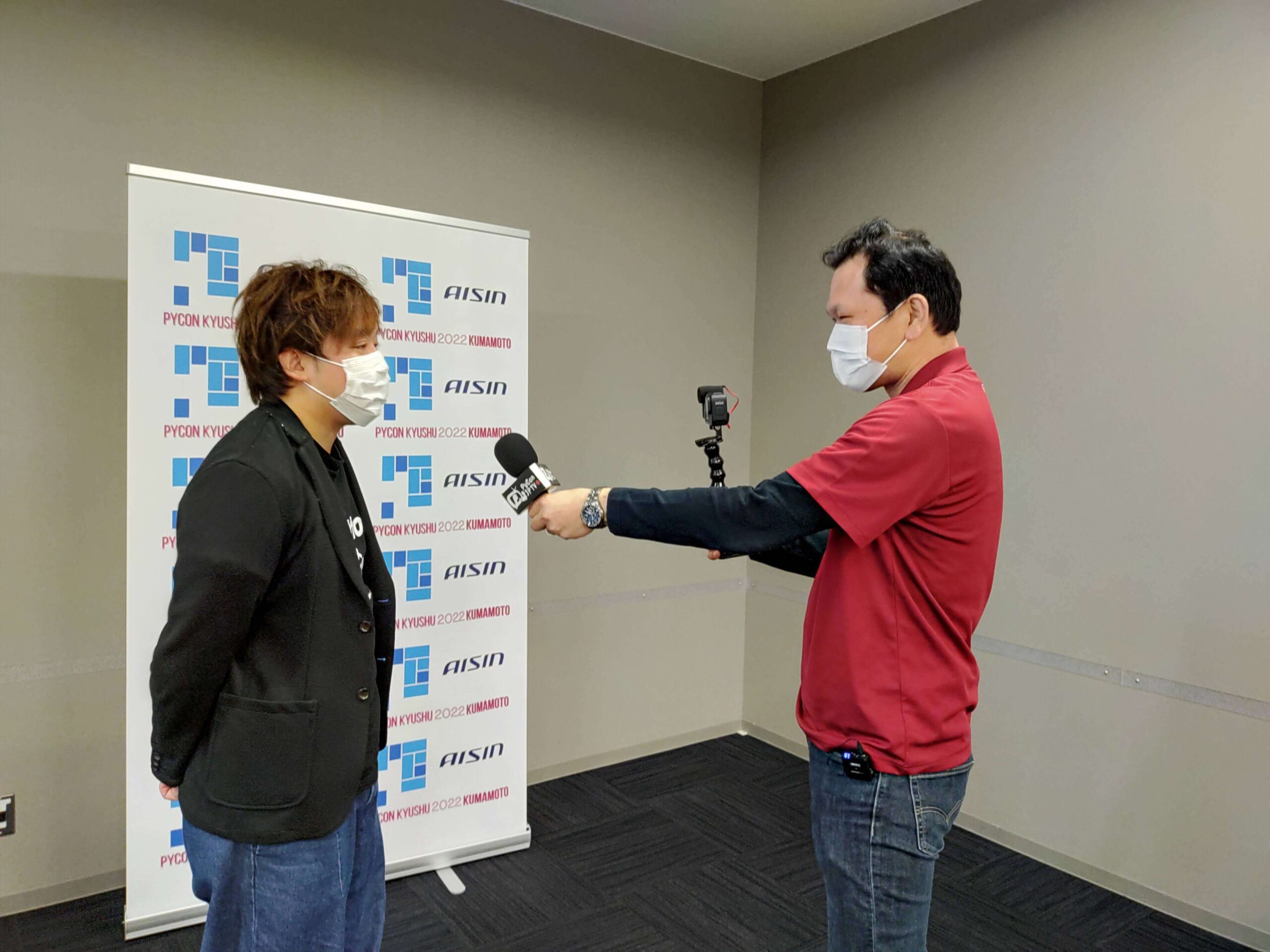 It was refreshing to finally get together again with the Python community to spend a day listening to talks and conversing in person.

I would like to thank the staff for PyCon Kyushu 2022 in Kumamoto led by Fumikazu Kiyota who overcame a difficult situation to still manage an in-person conference even though just the day before the conference Kumamoto Prefecture called a quasi-emergency state because of the rise in cases from Omicron.

The PyCon Kyushu edition this year had a total of 35 attendance including staff and sponsors. 11 people canceled due to the surging Omicron situation, so they saw the pandemic affecting 20% of this year’s PyCon Kyushu. 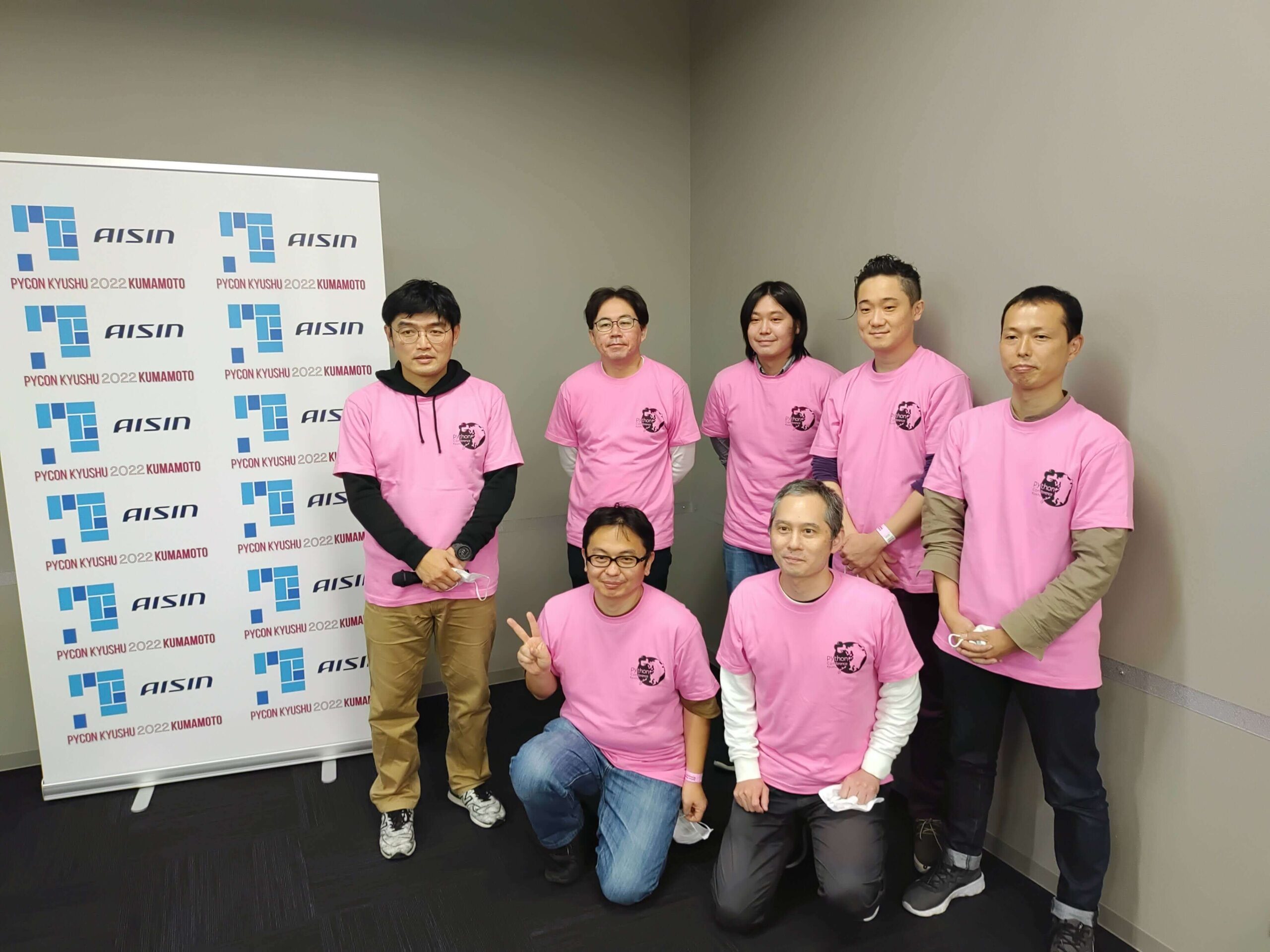 Finally, it was great meeting up with the odd 40 or so people who were there to support the conference. Here’s a group picture for those of you who couldn’t make it: 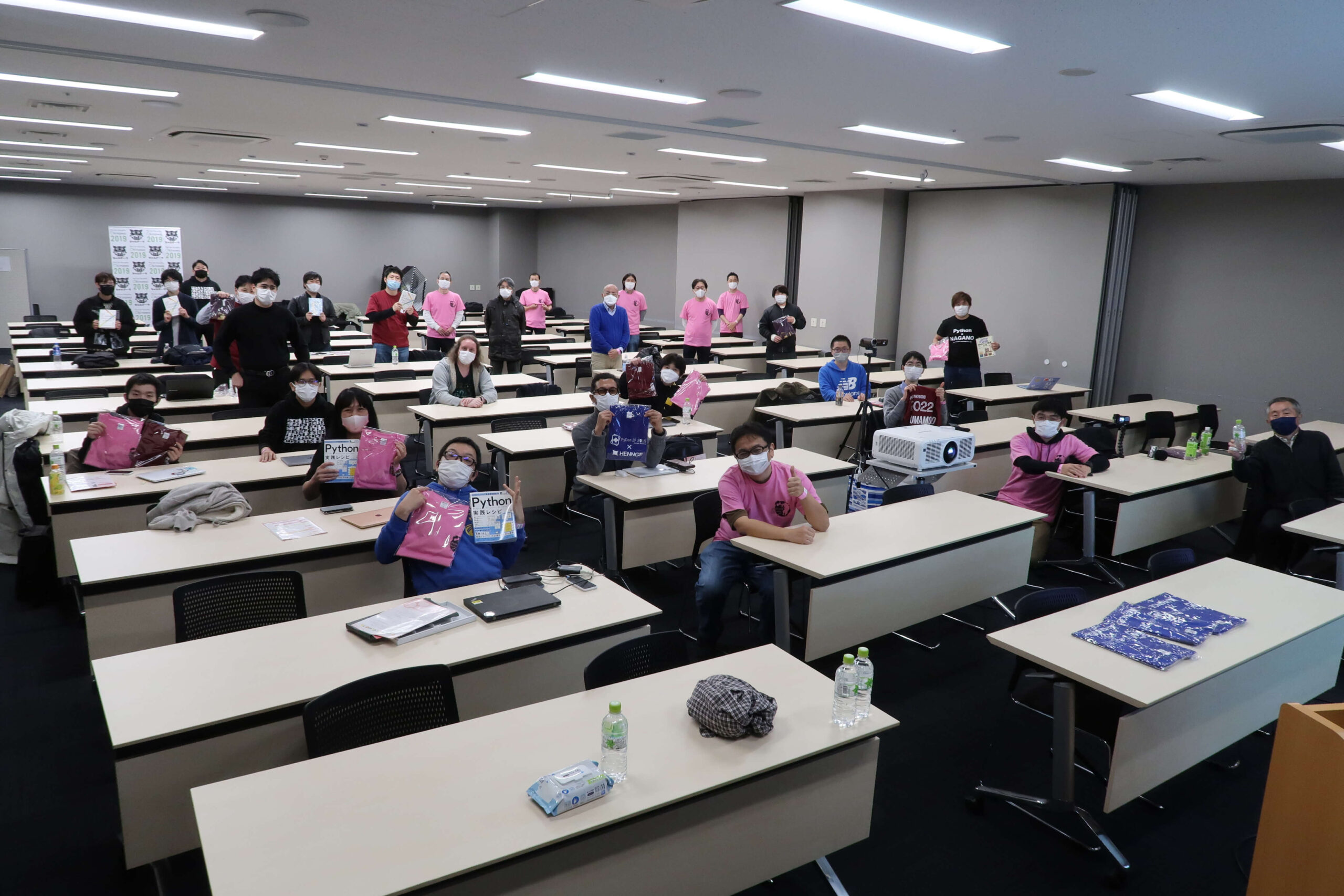 2022 kumamoto pycon
We use cookies on our website to give you the most relevant experience by remembering your preferences and repeat visits. By clicking “Accept All”, you consent to the use of ALL the cookies. However, you may visit "Cookie Settings" to provide a controlled consent.
Cookie SettingsAccept All
Manage consent