Hi folks! Iqbal writing in again. Being present in the community that we are involved in and has accepted us is important to us. So I spent two exciting and fun days with our friends during PyCon JP 2022.

PyCon JP returned with its 2022 edition, this time led by the conference chair Katayose-san and held at TOC Ariake. The whole conference lasted three days, with the first two for typical conference matters, the party, while the third day being was saved for sprints. 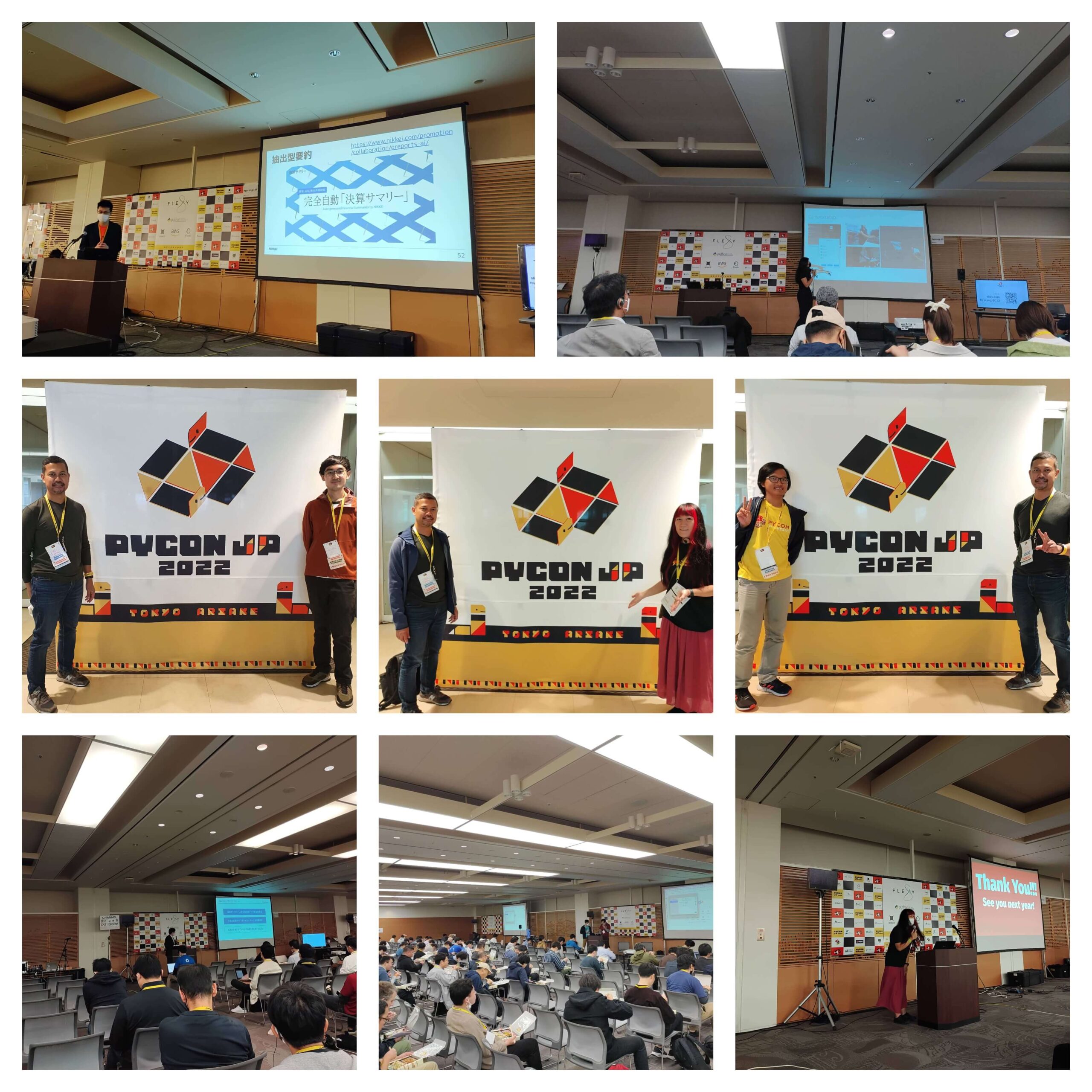 To welcome our overseas speakers and as an ice breaker, we had a pre-conference dinner a day before in Odaiba, Tokyo. Some of our guests had meal restrictions such as vegetarian so we chose a restaurant that had an English menu and non-meat options. 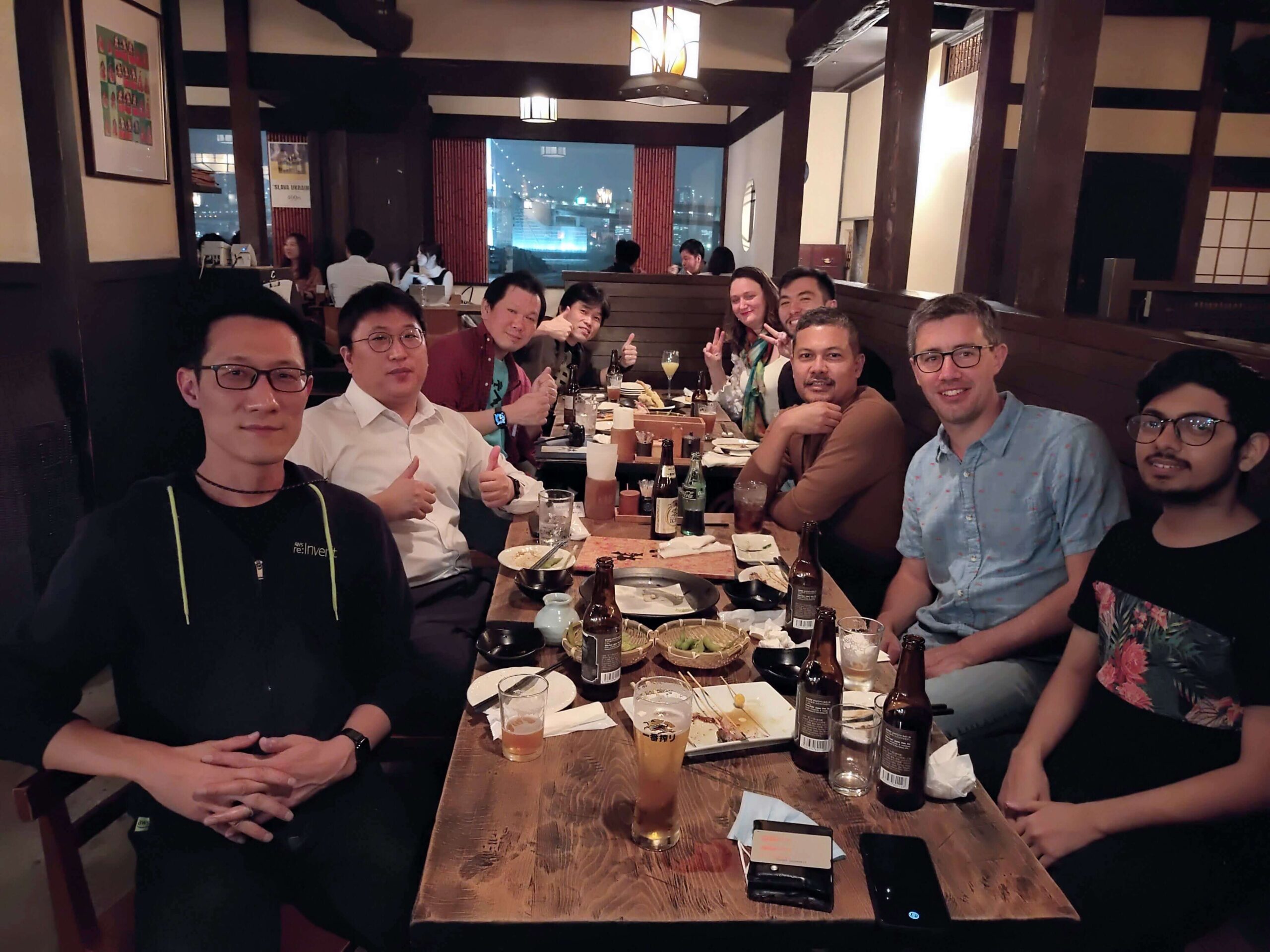 The conference started of at 9AM with registrations and the first keynote was by Mark Shannon. After a long hiatus of in-person conferences, I decided to skip the keynote and spent most of the morning and early afternoon to walk around and talk to the people.

Unfortunately there were a few English talk sessions which were canceled at the last minute due to their speakers request. This was a bummer for some of our guests from overseas but we ended up talking in a circle near to the sponsor booth.

Talk session: 業務改善の面白さ ~毎日更新されるビジュアルコンテンツの差分をわかりやすくするためのプロトタイプを作るまで~ or The fun of business improvement: Creating a prototype to make it easy to understand the differences in visual content that is updated every day

This was about the speaker’s experience developing an internal system that allowed visual diffs for visual contents. It was an interesting problem: How can the journalists see the difference between different versions visually (like a diff, but for images). She ended up iterating between some sample versions and the talk was about the steps that she took doing that.

Talk session: 実践：日本語文章生成 Transformersライブラリで学ぶ実装の守破離 or In practice: Generation of Japanese sentences “Shuhari” of implementation learned from the Transformers library

The second talk I managed to catch was about Natural Language Processing (NLP). The speaker was also from Nikkei like the previous one I attended. The speaker explained to us his experience in building an automatic summary generation system for Nikkei, based on previous articles that they have.

One interesting example the speaker showed to us was how the word Corona resulted in very different summaries and relationship with other words, prior and after the pandemic.

Like previous PyCons, at the end of the first day we had a bunch of Lightning Talks (LT). If you’re not familiar with LTs, they are short talks of 5 minutes, and the speakers usually talk about a library that they love, or a hobby which they have brought to a whole new level through Python.

One LT I was impressed with the speaker explained how he hacked a train simulator to use a train joystick instead of the keyboard to play the simulator.

These are the types of LTs which I like best. They are there to entertain and to inform. We really have talented people in our community!

The 2nd day keynote was by Hiromu Nishiuchi. Nishiuchi-san is a well renowned statistician in Japan and has appeared on TV shows, published books and also advised the Japanese government making policies based on evidence.

Most of the talk was about his field of work of statistics, his company’s product and their philosophies of training, what their customers are like and how Python is used within this context.

He talked about what a data scientist does. Taking out the data and processing it is only a small part of a the work: The most important part is taking the insights and making it accessible to stake holders who need to take action based on the insights gained from that data. It is to no surprise that 60% of a data scientist’s time is spent of fixing the data so it is in the right format to be processed.

Some of the questions asked during the Q&A:

The other talk I managed to catch on the 2nd day was by Anthony Shaw (of vscode-pets fame, among others!). He introduced to us new functionalities and improvements that can be found in the new Python 3.11.

TIP: If you want to use Python 3.11, you should download it from python.org and use a precompiled version for your distribution instead of compiling from source, unless you know what you’re doing because there are flags which you need to specify.

Some of the new and improved things we can expect in 3.11

Talking about performance improvements, if you’re using Django and your app is slow, caching has been found to be a solution in these cases.

But what does all of these mean for me?. Well, you can expect up to 30% performance improvements in most applications. If you need to convince someone to move up to Python 3.11, then you should benchmark your code.

Anthony also touched on what we can expect in the future.

Getting the community together

This PyCon JP was special because I managed to meetup with other community leads after a long hiatus due to the pandemic. Other than the community in JP, I managed to meet with Dima (ID), Youggun (KR), Joongi (KR) and Jordan (TW). Gajendra whom also I met during EuroPython was also there for a talk. We also had Mridul joining us from UAE.

We discussed things such as the current support for conferences within our respective communities and how we can continue to work together in the future. The subject of PyCon APAC, our yearly regional conference also came up. It’s during this informal discussions that we get valuable insights on what each community considers important and what kind of help the rest of us can give.

The conference organizers were kind enough to give us some booth space during the 2nd day of PyCon JP 2022 to setup and promote the PyCon JP Association and the Python Software Foundation (PSF).

The PSF, being a sponsor of PyCon JP 2022, plays an important role supporting the communities in this part of our world. As part of our efforts to further increase participation alongside PSF’s mission and making the PSF more inclusive, I made calls to action to the attendees to register as basic members of the PSF. I also asked them to answer our Diversity and Inclusion Survey so that the PSF knows better what kind of community it has, and what does that community think about its D&I efforts. 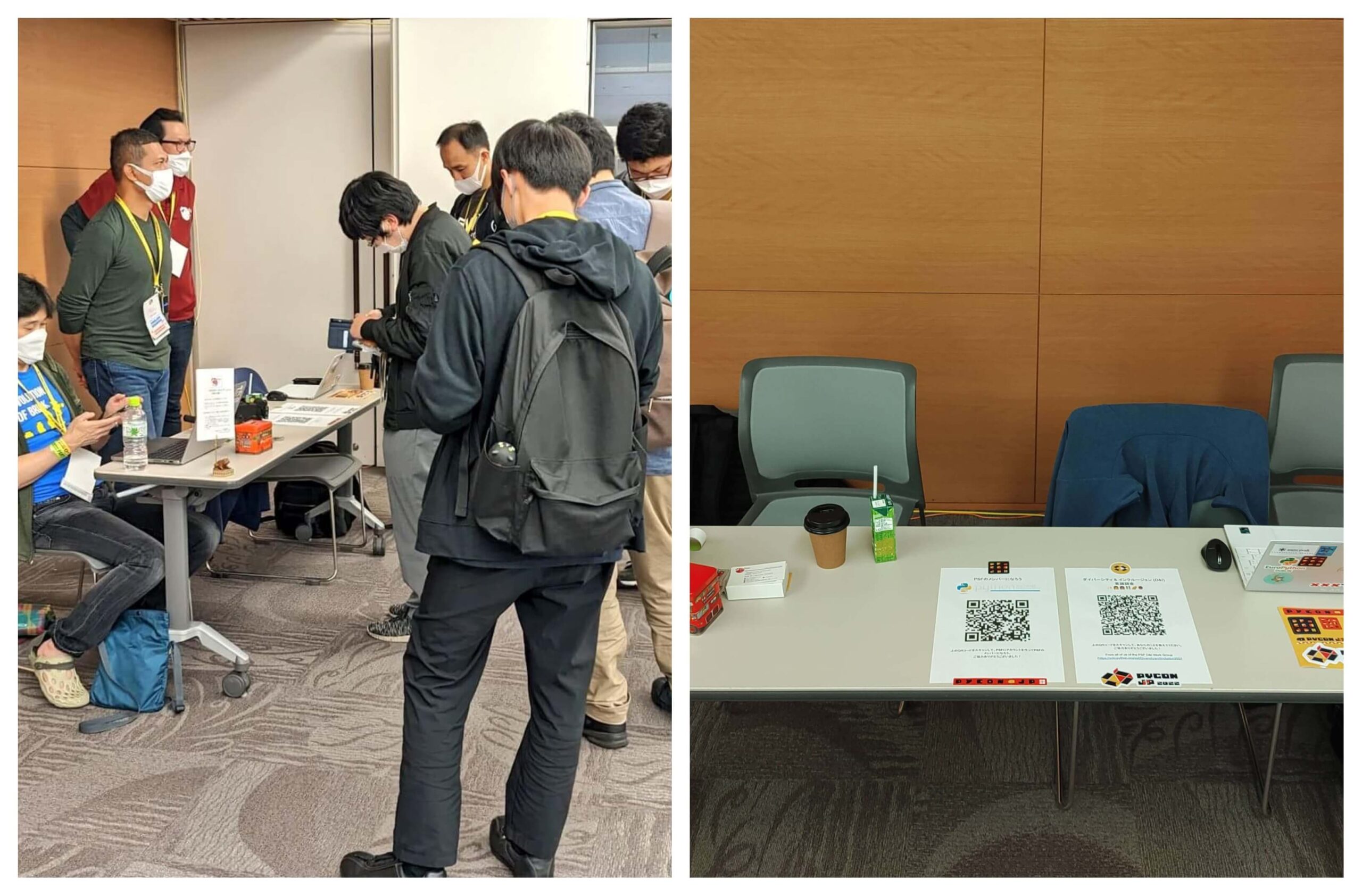 At the end of the second day, we all did a photo op: The volunteers went up front to take their photo, and then we had a big group photo before the closing. Terada-san who did the closing touched about being a member to the PSF and also working with the rest of the APAC region by attending PyCon APAC.

During closing, some announcements were made: 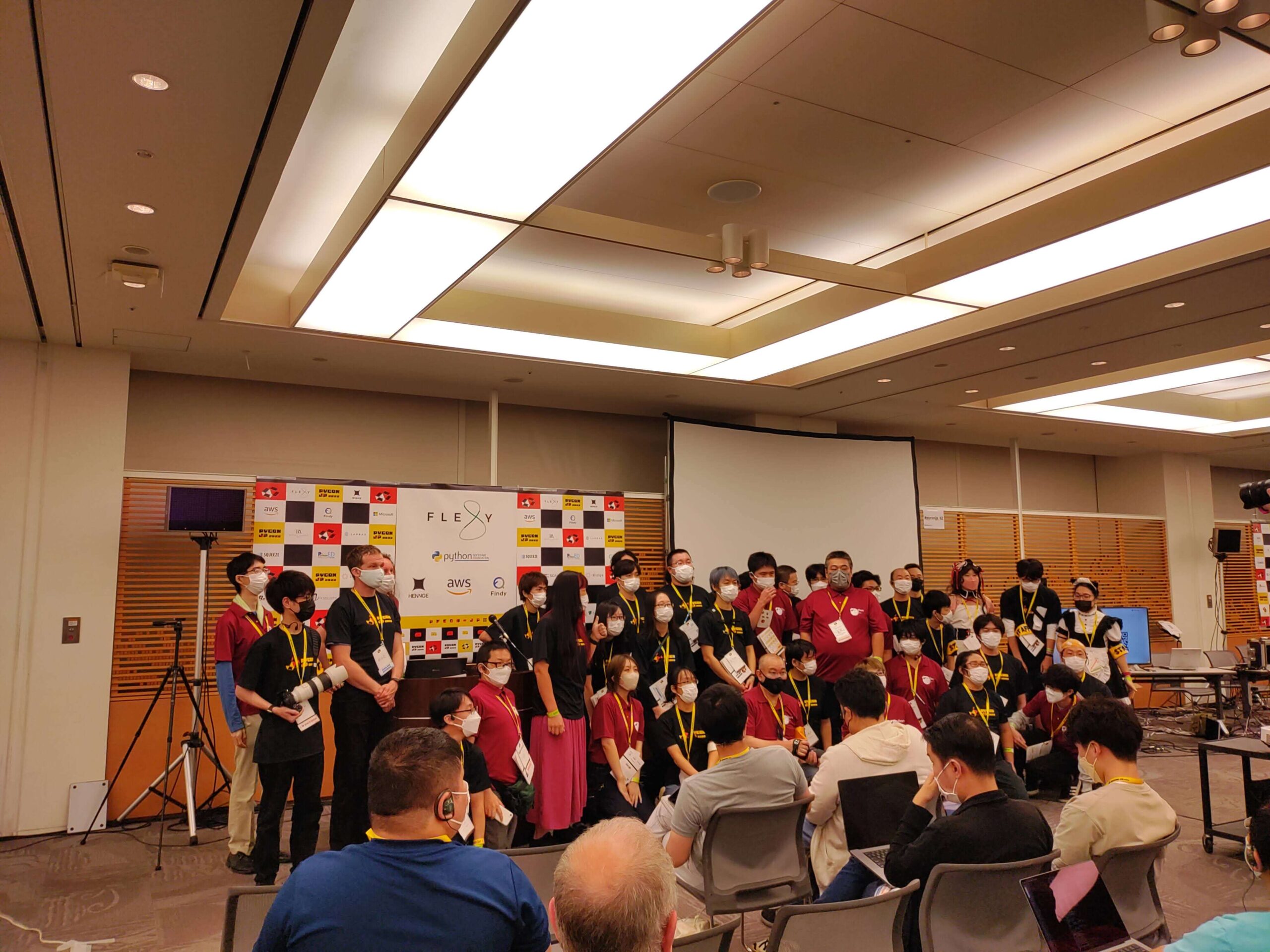 Overall, it was a fun PyCon, as it always were. I’m happy that we managed to have a “real” in-person event (PyCon JP was also “semi” in-person in 2021). The lifting of restrictions for the Japan borders helped, and hopefully the next edition of PyCon JP will be a much bigger one.

Until then, take care!

2022 pycon python
We use cookies on our website to give you the most relevant experience by remembering your preferences and repeat visits. By clicking “Accept All”, you consent to the use of ALL the cookies. However, you may visit "Cookie Settings" to provide a controlled consent.
Cookie SettingsAccept All
Manage consent